This content is for healthcare professionals based in the USA only.

Please confirm that you are a healthcare professional in the USA.

touchINSIGHT: Gocovri® for the treatment of dyskinesia and OFF episodes

Funding: The publication of this article was supported by Adamas Operations, LLC, a subsidiary of Supernus Pharmaceuticals, Inc who were given the opportunity to review the article for scientific accuracy before submission. Any resulting changes were made at the authors’ discretion.

Parkinson’s disease affects approximately 6.1 million people worldwide and 1 million people in the USA.1-3 The condition develops due to loss of nerve cells that produce dopamine in an area of the brain known as the substantia nigra, leading to slow movement, limb rigidity, muscle tremor, and frequent falls.4 Treatment with the dopamine replacement agent, levodopa and other dopamine-based medications typically results in an initial improvement in symptoms.5, 6 However, as Parkinson’s disease progresses, treatment is limited by the emergence of motor complications in nine out of ten patients after 10 years.7 These motor complications can include the development of periods where the response to treatment becomes more variable e.g. the medication effect wears off early, is not working or suddenly loses its effect (termed OFF episodes). Additionally, patients may develop periods of involuntary movements, termed dyskinesia.8-10 Dyskinesias are typically erratic in nature, compared with the rhythmic nature of tremors. Both OFF episodes and dyskinesia adversely impact the daily activities of patients, their quality of life, increase the burden for their care partner(s) and result in additional healthcare costs.11-17

Treatment of OFF episodes and dyskinesia

Traditional approaches to managing OFF episodes, including using higher doses of levodopa or adding other medications, can worsen dyskinesia.18-23 Conversely, lowering doses of these medications to reduce dyskinesia can cause more and/or longer OFF episodes, leading to a dilemma for symptom management.18-23 A medication called amantadine has historically been used as an alternative treatment option. This medication may result in minor improvements in OFF time and dyskinesia. However, the traditional “immediate-release” formulation is limited by its short duration of action resulting in the need for multiple daily doses that can increase the chance of side effects.24-31 Recently, a new amantadine formulation (Gocovri®) has been developed. Gocovri has delayed and extended-release properties that allow it to be taken once daily at bedtime.32 With bedtime administration, the Gocovri formulation allows amantadine levels to slowly rise overnight, providing higher blood drug levels during the waking day and lower drug levels at bedtime.33 Higher daytime amantadine blood levels are thought to be helpful in treating dyskinesia, while lower bedtime levels aim to minimize adverse effects on sleep.34, 35 Gocovri became the first drug with USA regulatory (FDA) approval for the treatment of dyskinesia, and is also approved to treat OFF episodes in patients with Parkinson’s disease taking levodopa.32, 36, 37 This article reviews the key results from studies of Gocovri in Parkinson’s disease. For further information on the clinical development of Gocovri, please click here to view the article. 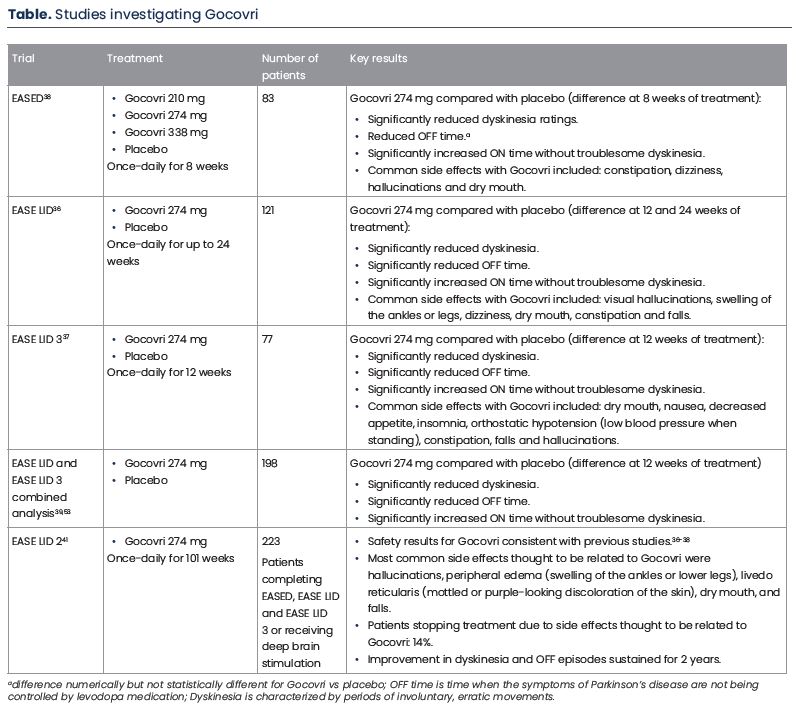 The clinical evidence for Gocovri in Parkinson’s Disease

The clinical benefit of Gocovri was primarily determined in three clinical studies including approximately 280 patients with Parkinson’s disease and dyskinesia, receiving levodopa therapy; approximately nine out of ten patients also experienced OFF episodes.36-38 An overview of these studies is included in the Table.

The first study, named EASED compared the effect of three different Gocovri doses (210, 274 and 338 mg) once-daily with a dummy version of the drug, termed placebo, in approximately 80 patients.38 In this study patients receiving Gocovri 274 mg for 8 weeks demonstrated a significant reduction in dyskinesia, the primary endpoint of the study, compared with placebo (Table). Gocovri had acceptable safety, with no effect on sleep duration observed. Common side effects with Gocovri included constipation, dizziness, hallucinations (seeing or hearing things that are not real) and dry mouth.38 As more patients had to withdraw from the study due to side effects with the highest 338 mg Gocovri dose, the 274 mg dose was deemed to provide the best benefit-risk profile, and was used in future studies.

The second and third clinical studies, named EASE LID and EASE LID 3, further investigated Gocovri 274 mg once-daily compared with placebo, in more patients (121 and 77 patients, respectively) and for a longer period of time (up to 24 and 12 weeks, respectively) (Table).36, 37 Gocovri significantly reduced the impact and amount of daily time spent with dyskinesia throughout each of these studies. Additionally, these improvements were coupled with a significant reduction in OFF time. Safety results for Gocovri were generally consistent with those of the previous EASED study. Common side effects with Gocovri included hallucinations, dizziness, dry mouth, constipation, swelling of the legs and ankles, constipation and falls. 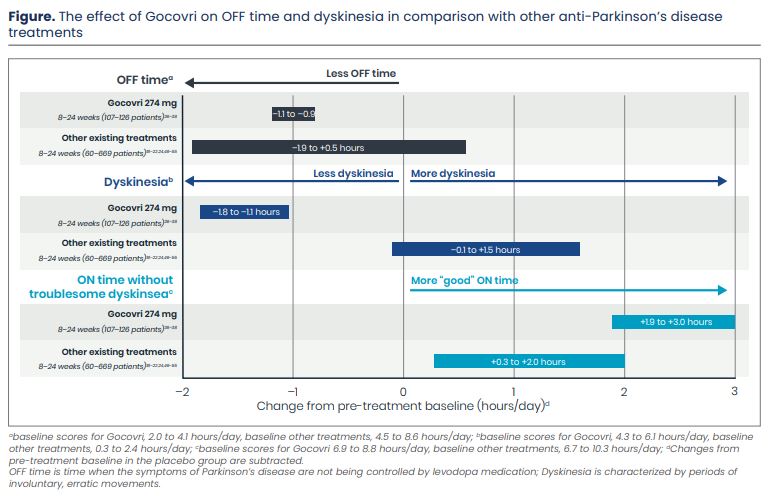 Gocovri’s clinical benefit has been further assessed in several additional analyses and a long-term study.13, 39-41 Analyses using patient data from both the EASE LID and EASE LID 3 studies (almost 200 patients in total),39 showed that reductions in dyskinesia were generally seen within two weeks of Gocovri initiation, with reductions in OFF time compared with placebo seen from 8 weeks of Gocovri initiation.39

A separate analysis of patient diary data available for 162 patients from the EASE LID and EASE LID 3 studies provided a novel examination of the patient experience of Parkinson’s disease symptoms over the course of the day.40 In their diaries for every 30-minute interval throughout the day, patients categorized whether they were predominantly in an OFF state (when Parkinson’s symptoms were present), an ON state (where levodopa and other Parkinson’s medications were working well), or an ON state but with dyskinesia that was sufficient to be considered “troublesome”. The analysis found that patients receiving Gocovri had decreased variability in their day, with approximately 25% fewer transitions between OFF, ON, and dyskinetic states compared with placebo. This resulted in longer daily periods of continuous “good” ON time (without troublesome dyskinesia).40

The final analysis assessed everyday activities that are commonly affected by dyskinesia.13 The aim was to see if Gocovri, by lessening dyskinesia, could improve a patient’s ability to perform or participate in these activities.13 Of the ten activities assessed, six of them were rated as causing mild to severe impairment by the majority of patients. Compared with placebo, Gocovri significantly reduced the impact of dyskinesia on walking and balance, eating, speech, engaging in hobbies, interacting in public or social settings, and when dealing with exciting or emotionally-charged situations. Gocovri also reduced the overall severity of dyskinesia in all body regions assessed.

The long-term effect of Gocovri was assessed in the 101-week EASE LID 2 study (Table).41 Patients who completed the EASED, EASE LID and EASE LID 3 studies were eligible to receive Gocovri in the EASE LID 2 study. Additionally, patients receiving deep brain stimulation, were allowed to enroll (use of deep brain stimulation was not allowed in the earlier trials). In total, three-quarters of patients completed one year of the study and nearly 60% completed the full two-year study, with only 14% of patients discontinuing treatment due to side effects thought to be Gocovri-related. The safety of Gocovri was consistent with previous studies.36-38 By 8 weeks of the study, on average, patients had less OFF time and dyskinesia compared with before Gocovri initiation, and these improvements were maintained for the 100 weeks of study.

Levodopa is an effective medication to treat Parkinson’s disease; however over time, OFF episodes and dyskinesia can develop. These unwanted motor conditions can interfere with a person’s ability to perform daily activities or participate in social activities. Most existing medications that treat OFF episodes, have the potential to either worsen or cause dyskinesia (Figure).18-22, 24, 37, 38, 42-52 In clinical studies, Gocovri, taken once-daily at bedtime reduced OFF episodes and dyskinesia (Figure). These effects appeared to continue over two years of treatment. Additionally, patients experienced improvement in day-to-day activities typically affected by dyskinesia, had fewer transitions into and out of OFF and dyskinesia episodes, and longer periods of continuous good motor function (“ON” time) without troublesome dyskinesia. Together, these results suggest that Gocovri represents a clinically significant advance in treating dyskinesia and OFF time in Parkinson’s disease.

Journal articles and more to your inbox

Get the latest clinical insights from touchNEUROLOGY

Please provide feedback for this touchinsight2 on the following
(scale of 1-5 where 1=strongly disagree and 5=strongly agree):

Thank you for your feedback.

Back to Activity
Copied to clipboard!