Please confirm that you are a healthcare professional. 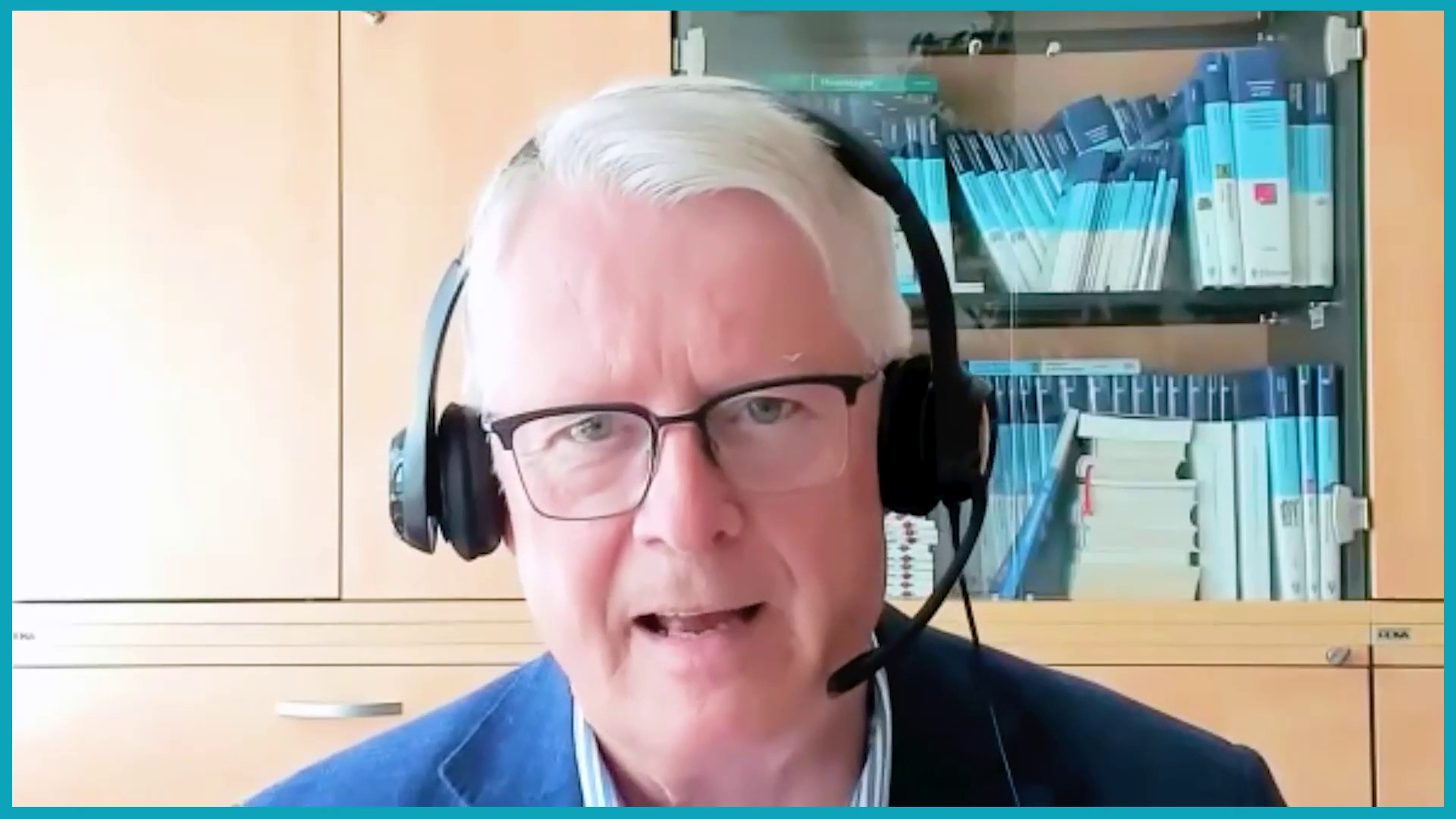 Highlights of a Symposium sponsored by Zambon SpA presented at the International Parkinson and Movement Disorder Society Virtual Congress, 2021

Advanced Parkinson’s disease (PD) is characterised by the presence of motor fluctuations, dyskinesia, and disability, which have a functional impact on activities of daily living, quality of life (QoL) and independence.1 Levodopa treatment can provide effective initial symptom relief (sometimes referred to as the ‘honeymoon period’), but over a few years many patients begin to experience shorter periods of efficacy, with both motor and non-motor Parkinsonian symptoms recurring before the next levodopa dose.2,3 This wearing off is thought to be a result of the progressive degeneration of dopaminergic nerve terminals inherent in PD, resulting in less uptake of exogenously administered levodopa and a shorter therapeutic response following dosing.4 However, increasing the dosing of levodopa to counter wearing off can also increase the risk of levodopa-induced dyskinesias; therein lies one of the key challenges in the management of PD.1,2

How to tailor PD treatment after the ‘honeymoon period’

To combat wearing off in PD, treatments were developed to help prolong the levodopa ‘honeymoon period’ without the need to increase the levodopa dose. Adjunct therapies currently recommended by the Movement Disorders Society Evidence-Based Medicine Committee include catechol-O-methyltransferase (COMT) inhibitors such as entacapone, tolcapone and opicapone, non-ergot dopamine agonists such as ropinirole, pramipexole, apomorphine and rotigotine, monoamine oxidase B (MOA-B) inhibitors such as rasagiline, and safinamide.5 Tailoring these treatments to the individual is a key part of the management of PD, and may involve patient preferences and a focus on not just motor symptoms, but also non-motor symptoms.

From a patient-centric perspective, an observational study in 61 patients showed that the non-motor symptoms most affected during the first 4 years after a PD diagnosis were emotional wellbeing, mood and pain (assessed using the 39-item PDQ).12 The prospective, open-label, single-arm SAFINONMOTOR study in 50 Spanish patients with PD demonstrated that safinamide treatment significantly improved these outcomes at 6 months versus baseline (39-item PDQ: 41% improvement in emotional wellbeing [p<0.0001), 25% in pain and discomfort [p=0.018]; NMSS: 58% improvement in mood/apathy [p<0.0001]).13

In summary, stimulating both dopaminergic and non-dopaminergic systems by using different treatments with different mechanisms of action may help to reduce the levodopa doses required for patients with PD to achieve control of symptomatic fluctuations.6-8 Safinamide, with its dual mechanism of action, has been shown to not only improve motor fluctuations in patients receiving levodopa, but also non-motor symptoms such as emotional wellbeing and pain.12,13 This combination may help to substantially extend the ‘honeymoon period’ before advanced and/or invasive PD therapies are required.

The impact of symptom fluctuations on patient quality of life

Symptoms that occur during wearing off periods can exert a considerable burden on the patient’s functionality, activities of daily living and independence, and tend to increase in severity as PD progresses.1,4 Data from the observational DEtection of wEaring off in Parkinson’s Disease (DEEP) study (n=617) showed that patients with PD who experience wearing off have significantly worse QoL compared with those who did not experience wearing off (mean 8-item PDQ score: 32.7 versus 21.4; p<0.0001).14 In addition, wearing off symptoms were shown to occur earlier than expected (using conventional clinical assessment), with 42% and 55% of patients showing at least two wearing off symptoms <2.5 years and 2.5–5 years after diagnosis, respectively.14

From the patient’s perspective, a survey study of 300 patients with advanced PD receiving levodopa showed that in 55% of cases, the main concern was wearing off, with only 23% being mainly concerned with dyskinesia.15 Similarly, a UK study of 265 outpatients with PD showed that 28% of patients experiencing wearing off rate a fluctuating response to medication as the most troublesome PD symptom, followed by mood (28%), drooling (21%), sleep (23%) and tremor (17%).16 An online survey of 305 European patients with PD also revealed that wearing off affected almost all key daily activities, with the most commonly-affected (>20%) being dressing, washing/keeping clean, effective communication, and getting around the house.17

Detecting wearing off as soon as possible so that appropriate measures can be taken is therefore critical for patient QoL, and several patient questionnaires have been developed to assess both motor and non-motor symptoms and identify periods of wearing off. In particular, the Movement Disorders Society task force recommends the 19- and 9-item wearing off questionnaires (WOQ-19 and WOQ-9) for diagnostic screening, and patient diaries (e.g., for monitoring motor fluctuations and dyskinesia) for the assessment of wearing off severity.3,18 It is also key to recognise the need for appropriate and timely referral to a movement disorder specialist. Practical guidance from a pan-European educational program (Navigate PD)19 recommends that non-invasive therapies (levodopa with dopamine agonists, MOA-B inhibitors or COMT inhibitors where indicated) may be considered insufficient when QoL is reduced due to motor fluctuations (with or without dyskinesias) to an extent where both the clinician and patient agree that non-invasive therapy alone is no longer effective.19 In general, patients should be referred to a specialist if levodopa is required at least 5 times a day, although the exact number of doses is not relevant if the treatment is tolerated by the patient and an adequate reduction in off time is achieved.19 Overall, challenges still remain in the management of PD symptoms, and research continues to improve the detection and appropriate treatment of wearing off in patients with PD.

Following approval of safinamide for the treatment of symptom fluctuations in PD (as adjunct therapy to levodopa),20 and in line with European Medicines Agency recommendations, a Drug Utilization Study (SYNAPSES) was conducted to assess the safety of safinamide in a real-world setting.9

In total, 1,610 adult patients with PD were enrolled within 4 months of starting safinamide treatment and monitored for up to 1 year (>80% were monitored for 1 year).9 These were generally balanced across subgroups of special interest (patients >75 years of age, those with relevant comorbidities, and those with psychiatric conditions – i.e., those not usually eligible for controlled clinical trials), except for age of onset in the >75 years subgroup.9 Overall, 714 (46%) patients experienced at least one AE, 143 (9%) at least one SAE, and 432 (28%) at least one ADR (Figure 1).9 The large majority of AEs were mild or moderate (n=1292 [90%]; Figure 1) and only 2% were considered to have a definite relationship with safinamide.9 A clinically important difference from baseline on UPDRS part III score was also observed in patients receiving safinamide, with 262 (39%) and 321 (45%) patients experiencing an improvement of ≥4.3 points or ≥2.5 points, respectively.9 In subgroups of special interest, no relevant differences in safety outcomes were observed versus their opposite counterparts (Figure 2).

Overall, the results of the SYNAPSES study provide further evidence of the safety and tolerability of safinamide in a real-world population.9 Neither age, comorbidities nor psychiatric conditions appeared to have any relevant effect on the safety profile, and clinically significant long-term improvements in motor function were observed.9 Safinamide is therefore an effective adjunct therapy option for the management of motor fluctuations in patients with PD receiving levodopa.

In summary, wearing off of levodopa therapy in PD presents a substantial challenge to patient QoL. However, adjunct therapies such as safinamide can help maintain the effectiveness of levodopa therapy, and enable patients to achieve long-term control of both motor and non-motor fluctuations.

Journal articles and more to your inbox

Get the latest clinical insights from touchNEUROLOGY

Please provide feedback for this touchinsight2 on the following
(scale of 1-5 where 1=strongly disagree and 5=strongly agree):

Thank you for your feedback.

Back to Activity
Copied to clipboard!